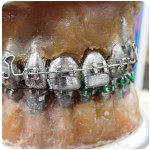 Having straight teeth isn’t just a modern day concern – even Greek philosophers debated how to fix a crooked smile! We know that primitive versions of orthodonture existed in ancient times because mummies have been discovered with bands on their teeth. But these appliances weren’t always used to improve smiles for the living. In the case of the Etruscans, bands were put on mummies to ensure that their teeth would be preserved in the afterlife!

The materials used for orthodonture were very different in ancient times. Instead of metal brackets, some ancient societies used cords made out of catgut, a fiber found in intestines. This was more pleasant than Medieval orthodonture, which often consisted of extractions and blood-letting. Modern trips to the dentists don’t sound so bad now, do they?

Though Roman Philosopher, Aulus Cornelius Celsus was the first to document treatment of teeth, dental research didn’t really start until the 18th Century. A French orthodontist named Pierre Fauchard is one of the fathers of modern orthodontics. He invented a contraption known as the “blandeau” which helped to expand the palate. Soon after, another French dentist, Ettiene Bourdet, came up with methods of extraction to fix crowding issues. Bourdet was also the dentist to the King of France!

Orthodonture began to quickly improve in the 19th century. This is when providers began to use appliances like gum elastics, rubbing tubing, and the wire crib. In 1880, a dentist named J. N. Farrar suggested that the best way to correct teeth was to use mild force at timed intervals. This completely changed the way that the field thought about fixing orthodontic issues! Another important figure at this time was Edward Angle, who founded the first college of orthodontics and the first orthodontic journal.

Braces during at the beginning of last century looked much different than modern day appliances. At that time, not only did the metal bands wrap entirely around each tooth, they were also often made of gold, which made getting treatment even more expensive! Stainless steel became more commonplace in the 1950s, but braces still wrapped all the way around teeth until the 1970s. Since then, there have been even more innovations in the orthodontic field, including lingual braces (which go on the inside of teeth) and invisalign treatments.

Children and adults through the years have been able to improve their life through orthodontic treatment. We at SCL are so excited to see the next generation leave our program with healthy, straight smiles because of the generosity of our providers. Now, that’s what we call making history!